sharing a cup of coffee one place at a time

I flew on Iberia Airlines from Dubrovnik to Madrid. There were moments when announcements from both the pilot and crew made me chuckle. I think they do and say a few things differently but they were efficient and on time. I love efficiency especially after all the delays during my outbound flight. The 3 hour flight didn’t offer drinks or snacks so be prepared to eat before or buy a sandwich on board.

Arriving at Madrid airport really puts a thing or two in perspective. One, the airport is big and probably the biggest airport I’ve ever flown into. Second, the airport is vast and wide. Immigration was a breeze and so was finding a taxi. The flat rate from the airport to Gran Via in city center was 30euros.

Because it was nearly 1:30 in the morning when I arrived at the hotel, I decided to sleep and wake up early. By 6:30a, there was enough light that I could navigate the streets safely to find San Ginés for some hot chocolate and churros. This was the part of my Madrid layover that I looked forward to, but it actually didn’t satisfy me. The churros were, as described by the concierge last night, not sweet like in the US.

They were skinny and uncovered in sugar. The hot chocolate was surprisingly not too sweet, which makes dipping the churro in it deliciously sweet. I saw several people drink it but I didn’t do this. For under 10 euros, this sweet treat early in the morning was a nice introduction to Madrid. 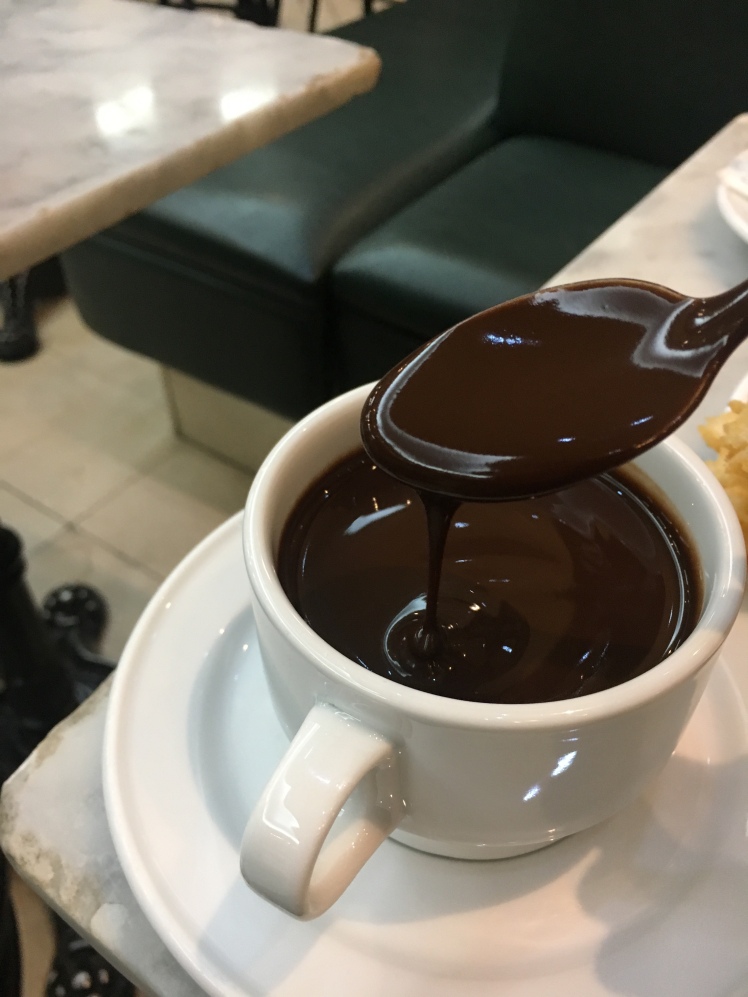 From San Ginés, I made my way to Plaza Del Sol and took a quick touristy look at the landmarks such as the bear and the strawberry tree, the kilometer zero, and the post office with the famous clock. All of these were near each other. I’d love to have wanted to see the Royal Palace, but this can wait.

I enjoyed and admired the old buildings, their doors, and windows.

I marveled at the graffiti on some doors and the wide streets. I listened to the rapid Spanish from the locals and smiled upon seeing a Burger King and Five Guys (hamburger joint).

Here’s a rooftop view of Madrid from the hotel Aloft Madrid Gran Via. 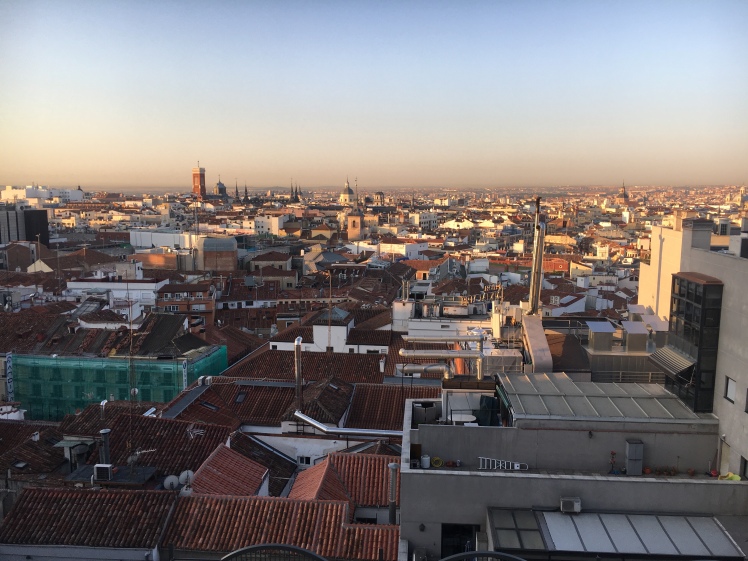 I will be back, Madrid.

From Gran Via to the airport took 25 minutes by Uber for about the same fee as the taxi. Be prepared to arrive early at the airport particularly if you are flying out of T4. It took me 1 hour to finish everything including the train ride from T4 to T4S (satellite), the many escalators you’ll have to ride on, the shuttle bus that will take you to T4S, and the possible but random security check at your gate bound for the US.

This is where my Summer ends despite another flight from JFK to Ohio. I’m already dreaming of my next vacation but I don’t know where. Yes, I’ve got a list but that is just a list. The world is my oasis they say. So I’ll let it embrace me and I’ll see you in a different city and country next time.